The city of Vancouver removed all clothing bins from their streets in response to deaths that have occurred across Canada from bin divers becoming stuck. Big Brothers needed a safer solution in order to continue operations in the city. Myself and the others involved came up with several ideas to improve safety, and make it less likely that a bin diver would be able to get stuck inside the bin. My two designs were the Candy-Cane mechanism, and Grashof mechanism. The Candy-Cane mechanism moves a rotating back-plate with the use of a candy-cane shaped bar. This makes the opening needed to get inside the bin smaller, and increases it at a constant rate as the bin is closed to allow bags to enter. The Grashof mechanism is a much more complex and robust version of this. It uses a 4-bar grashof quick-return mechanism to increase the opening at a non-linear rate. The grashof mechanism keeps the opening infinitesimally small until the back plate is out of view, then it quickly opens back-plate to allow the clothes to drop into the bin, as shown in the motion study below.

This project was covered by both UBC and Global news okanagan.

The bin used by big brothers before modifications 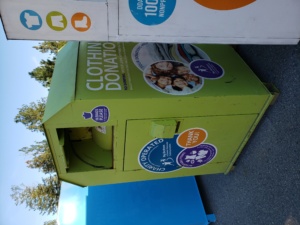 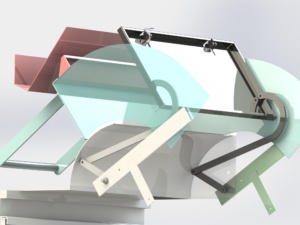